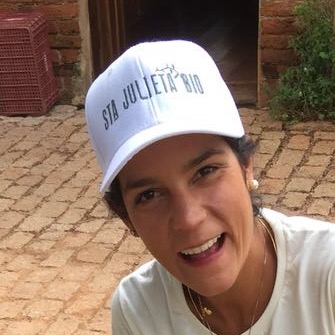 I’m a chef from Paraná, Brazil. My only « son » is the Manu restaurant in Curitiba, and it is here that I cooks experiments with naturally Brazilian products, mostly from the region of Paraná. My products are carefully selected. Good taste and sophistication are keywords in my productions. The care and handling with the inputs is strict, for me, every detail counts. Urban garden and Manu Buffara Manu Buffara could not resist. Cried Before hundreds of people, when asked to talk about healthy eating, at the lunch that promoted on Sunday (24), in the Horta of Rio Bonito, in Campo de Santana, outskirts of Curitiba. She gets emotional even when she realizes that people around her are aware of what she says, about the best way to eat and enjoy food. And there were hundreds, all from the local community, from active families in the day-to-day community garden there – and a few others who came to see what was happening and stayed there, delighted by the good food and the proposal served. Lunch was her initiative, which dealt with everything from the meat (ribs) donated by organic producers – which she baked from yesterday, in her own restaurant – to the different draft of one of the many artisan producers in the surroundings of the city. He also made the pita bread, which he roasted at one of the barbecue grills installed on the spot. The mayonnaise had the beet root of the own vegetable garden, harvested at the time, as well as all the leaves that composed the salad that accompanied the meat in the bread. The lunch cost R $ 5 per dish, plus the same for the beer and all income was reversed in favor of the Association of Residents of Rio Bonito, which, through its president, Delso Moretti, manages and manages the urban vegetable garden that integrates the program of the Municipal Secretariat of Agriculture and Supply of the Municipality of Curitiba. Manu does an admirable job there, as admirable is practically everything that is around him. When the idea of ​​launching the Chef’s Horta project came up earlier this year, she was the first to join. More than that: it has practically become the leader of all, to suggest prices, values, form of harvest and other points to be observed. Chef’s Vegetable Garden The urban vegetable garden had been around for quite some time, since 2011, Chef began to take over the work in 2013, but in 2016 she started bringing other chefs, cooks to a project drafted by her and the Department of Supply. The production was too large for the small local demand, since the consumption was practically of the relatives and friendly near the hortairs. The idea of ​​joining the production tip with the outlet end, the restaurants, allowed the cooks to approach and practically interact with the producers, suggesting items to be planted and choosing the best time to harvest. Only with the contribution of the chefs in the purchase of the products, the association has already collected enough to guarantee more inputs for new plantations. Except that Manu Buffara could just pop in there, pick up the greens of desire, and leave. But she could not help herself, she wanted more. I wanted to teach the local villager the best way to enjoy every vegetable or vegetable. The stem of it, the leaf of the other, to the flower and the bark of some, why not? Then came the idea of ​​promoting this lunch, which filled with emotion the Sunday in the garden. She and all those present who have felt how passionate she is for what she does and what is not for free the international recognition she has been getting in recent years since her restaurant was elected by two different publications (Quatro Rodas e Prazeres da Mesa ) as the best in Brazil, thereby opening the borders of the world. Manu Buffara is very big, for what he is and for what he does. Unfortunately, it just does not have the proper return in the city where it built all this pillar of success, since 75% of the visitors to its restaurant, the Manu, are customers from other cities. But one day she will certainly still have the same recognition among us. Who cooks with so much feeling and passes so much emotion thus to tell and to teach what it does, always deserves the best. Journalist: Luiz Augusto Xavier Besides being a journalist, he was part of the Chef project in 2016 and 2017, as a volunteer.